I noticed the dog was barking when I went out to fetch some firewood. He was persistent in a way I have come to learn means he has found some creature and is calling me to check it out. I aimed my flashlight towards the pond where he was, and saw another pair of eyes beyond Arthur as he stood his ground barking. I came closer and saw that he had backed a Raccoon up against the edge of the pond. I have ducks on the pond and Raccoons are not above killing and eating poultry, so I dashed back indoors to get a gun. I picked the .22 (Savage 64). Rushing back upstairs from the gun safe, I grabbed the magazine which had some federal rounds loaded ready, and I clicked the magnetic flashlight to the barrel as I headed back out. Arthur had followed me back to the house. Down by the pond, the Raccoon was stalking around the pond’s edge, looking over at the ducks that were eyeing it warily from the middle. I quickly chambered a round and took aim, and made a head shot. The Raccoon’s head snapped round as it tumbled to one side, but then stood up again. I took aim again, and fired between the eyes. All in all, I gave it 8 rounds, smashing its jaw completely in the ugly process until I could put one through its brain and it finally thrashed out it’s death throes. Note to self: get some high velocity ammo. The regular Federal doesn’t break the skull of an adult Raccoon. 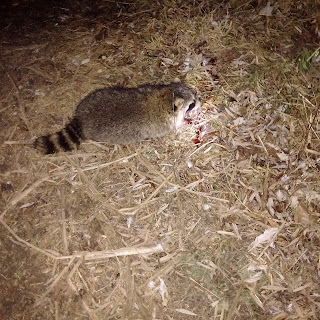